The BPG Sports High School League continued this past Wednesday, with its more exciting teams and fast-paced action.

Here were a few of the best games of the day:

Neumann-Goretti started the game much stronger than in their bout against Seaford. They netted 17 points in the first, spearheaded by the big man Sultan Adewale. He had 11 of their 17, bullying his way in the paint and even banking in a three to start the game. Jaiden McGhee of Middletown had a hot start of his own, hitting a couple of threes and a layup early on. After one, Neumann-Goretti led 17-12.

The pace slowed down a little bit in the second quarter, but Neumann kept its foot on the gas, with Khaafiq Myers starting to get a bit more aggressive. He knocked down a three and had a strong move inside. Marcus Edmond also began to get going, but Neumann-Goretti still led at the half 27-18.

Turnovers cost Middletown heavily in the third. Despite opening strong, with a couple of and-one’s from Marcus Edmond and Jaiden McGhee, the Cavaliers’ offense stalled, and Neumann-Goretti capitalized. Robert Wright III had a flurry of steals leading to easy layups in the quarter. A couple of free throws from Middletown cut the Neumann lead to 11, as the game entered the fourth quarter at 38-27.

That lead did not change in the fourth quarter, despite Middletown’s best efforts. Some nice play on the ball from Khaafiq Myers and Robert Wright effectively ended the game, and Neumann-Goretti won 56-39. They jump to 2-0 in the summer league, whereas Middletown falls to 1-1 following a rout of Chester in their first game.

Taking a look at a few of the best games from the day:

These two solid North Delaware squads had a dog fight, with neither team giving up ground in a hotly contested matchup.

In the first half, St. E’s jumped out to an early 5-2 lead off some nice pressure in the paint. However, Miles White and Caravel replied in fashion, with John Clemmons and Miles White converting on some nice And-1’s in the paint to give them a 10-8 lead after the first.

The second quarter was controlled early on by St. E’s, with suffocating backcourt pressuring tuning into easy buckets for Jermai Stewart-Herring and garnering them a five point lead. However, to end the half, Miles White went on a five-point run of his own to end the first half. Caravel trailed by two after the first, 22-20.

Heading into the second half, the third quarter became a little sloppy for both teams. Caravel maintained their momentum that they went into the half with, though. Miles White and John Clemmons knocked down a couple of tough three-pointers, and Caravel entered the fourth with a 31-27 lead.

White knocked down a quick three-pointer early in the fourth to take a seven-point lead, but St. E’s came roaring right back. With a nice zone press, St. E’s came back and tied up the game at 40 apiece with time running down on the clock. A Miles White foul sent St. E’s to the line with 0.2 seconds to go. St. E’s knocked down the first, and Stewart-Herring had a putback dunk to end the game with an exclamation point. The Vikings took the game 43-40.

A scrappy Middletown team showed its potential in a big win against a solid Chester team.

The game was never very close. The Cavaliers opened up with a solid 8-2 run, and widened it to a 15-8 lead after the first. By halftime, that lead had widened to 15 points, with the score being 31-16. Though Chester tried to bring it back at times, with a couple of back-to-back threes late in the third, their best efforts weren’t enough. The final score was 53-29.

One of Delaware’s most storied programs in recent years took on a gritty John Carroll squad out of Maryland.

The two went at it all game long, but it was John Carroll who had the advantage early. Making full use of the space that Dover was giving them on the perimeter, the Bel Air, Maryland team was raining threes early. However, Dover wasn’t making it easy for them. John Carroll never had a double digit lead, and lead by only four going into halftime.

Dover really turned it on in the third. After a number of tough buckets, including some nice drives from Jaheim Harrell and a couple of three pointers from Amir Hite gave them a nine point lead at the end of the third.

John Carroll showed their fight, in the fourth, getting as close as four points, but in the end, it wasn’t enough. A couple of bad fouls by John Carroll late sent Dover to the foul line, and that was the ballgame.

It was certainly slow starting out. Neither team was able to get any offense going early, especially Seaford. The score was just 4-0 after the first quarter. The second quarter saw some marginal improvement, with both teams picking up the offense a little bit. Sultan Adewale had a couple of strong finishes inside to give Goretti a 15-8 lead at the half.

The game began to pick up in the second half, with both teams finally getting the offense to click. Seaford mounted a solid comeback in the fourth quarter, but it came up just short, with the Saints taking home the W 37-36.

Khaafiq Myers ended with 14 points on the day, and Sultan Adewale had six of his own, despite not playing in the fourth quarter. Goretti were also without Robert Wright III, who just came back from the Pangos All-American camp. Careen Bolden led Seaford in scoring with 13 points. Brent Ricketts had an uncharacteristically low five points. 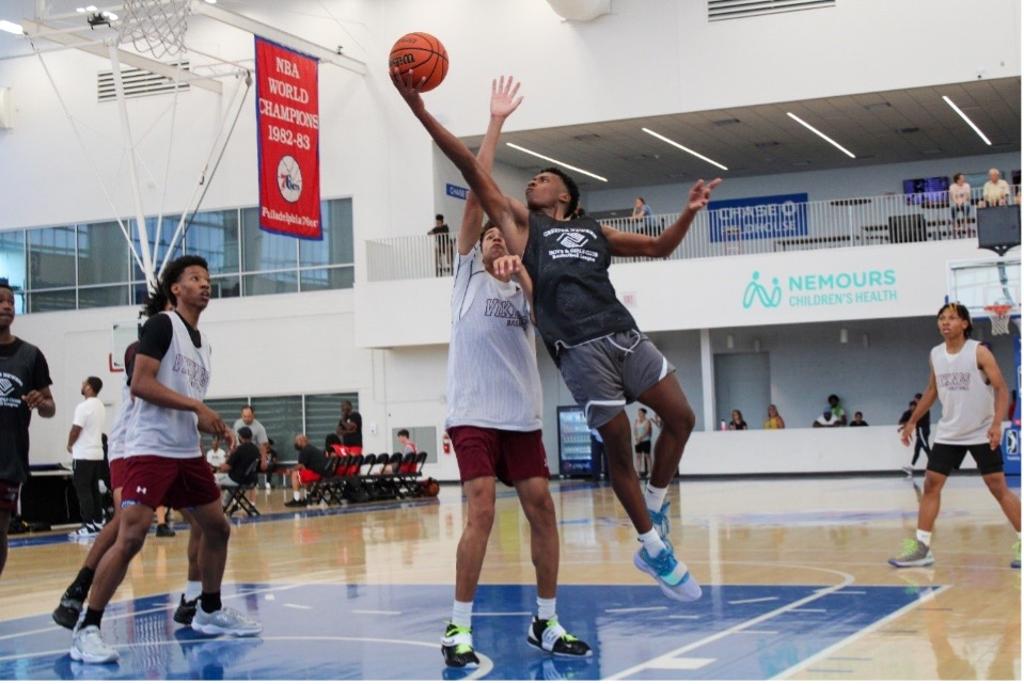 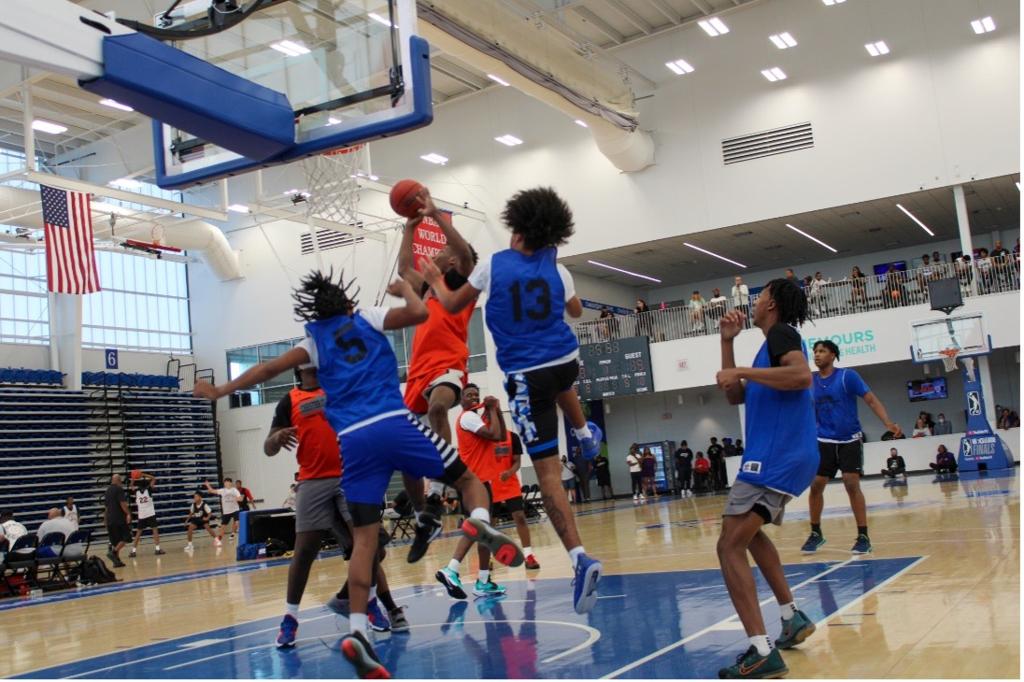 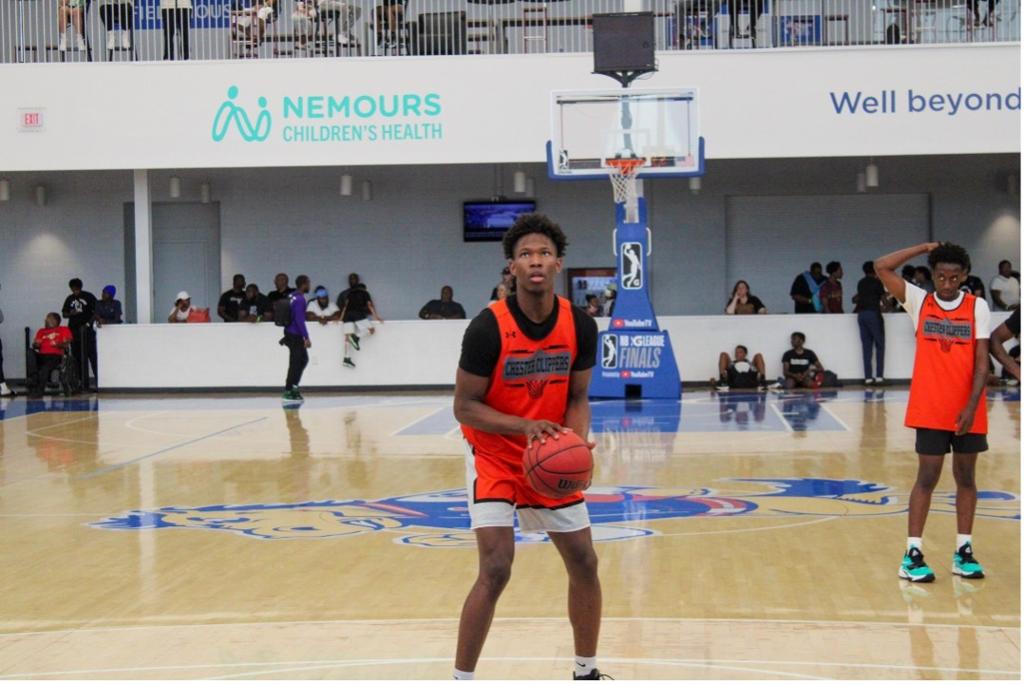 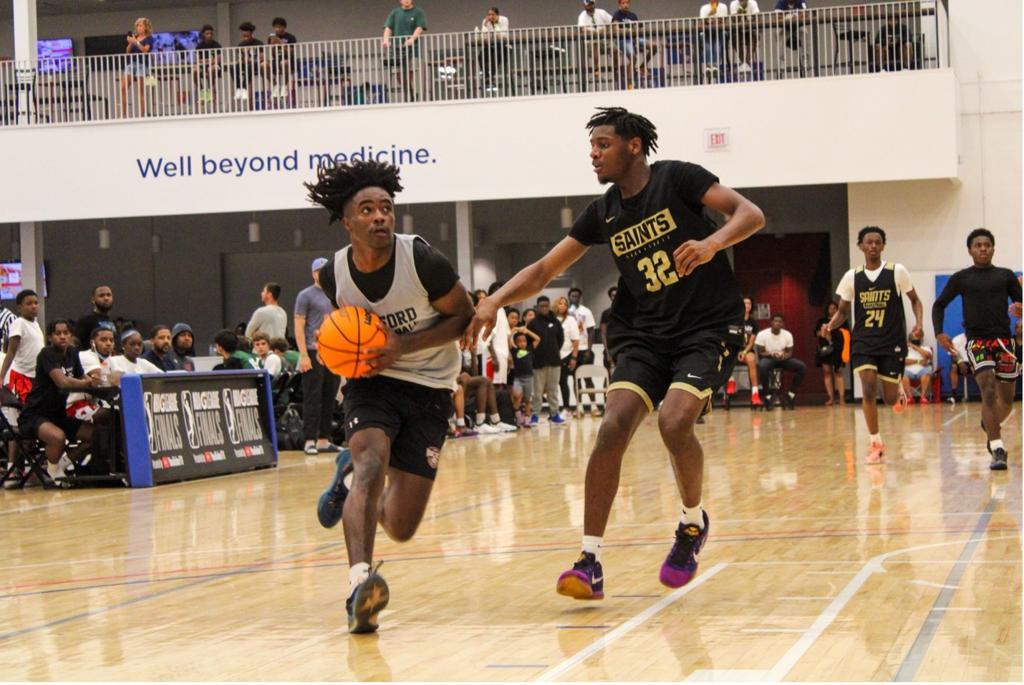 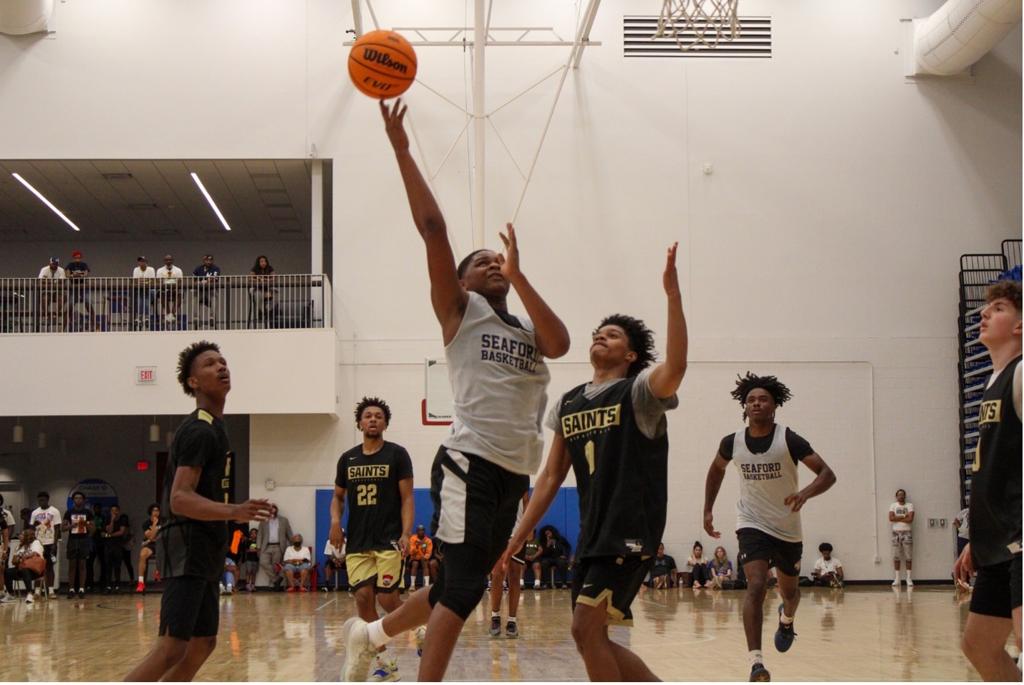 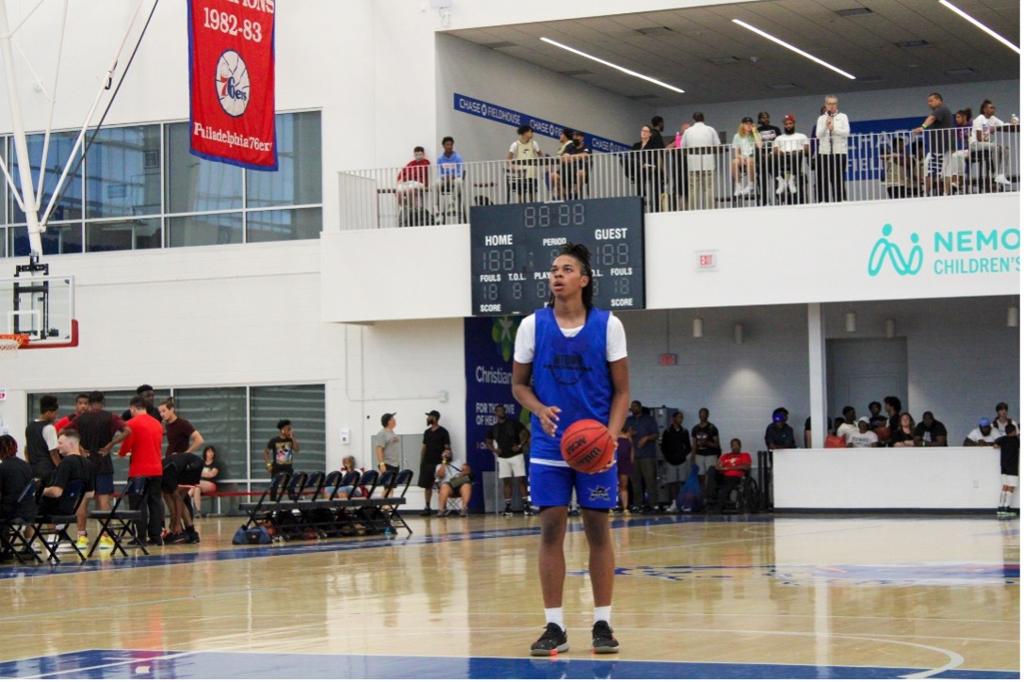 Jaden Rogers takes a foul shot to end the quarter 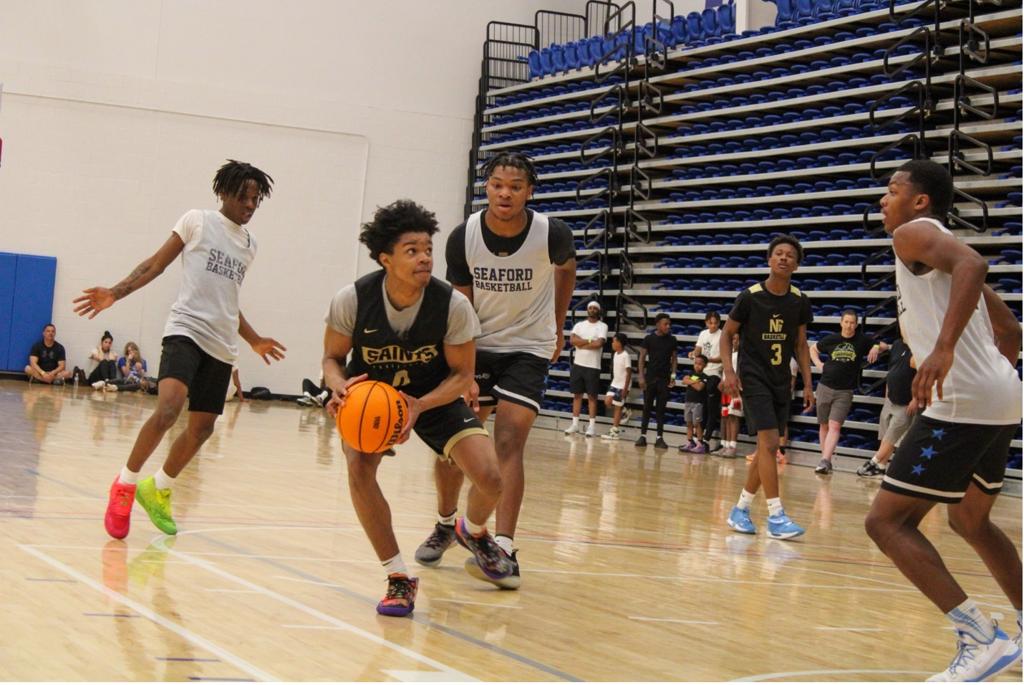